Two hats in one 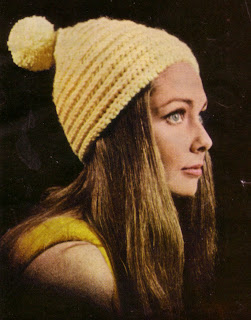 I love the way that this cosy knitted hat from a Argyll yarn pattern can be worn in two ways: firmly pulled over the head for maximum warmth, or perched on top for a more cheeky gamine/blimey-my-ears-are-cold sort of look.

Yarn: 4ozs DK. It's knitted in doubled-up double knitting yarn for extra warmth - you're knitting with 2 balls of yarn at the same time.

Needles: pair of No 4 UK needles.

Note: Wind 2 balls of yarn together before commencing. Using No 4 needles cast on 27 sts, and k 1 row. Commence pattern: - 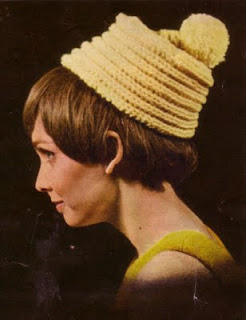 st below next st on needle, slipping st above off needle in normal way (called K1B), k1; rep from * to end.

To make up: sew together cast-on and cast-off edges, leaving centre of crown open for pom-pom. Press. Make a pom-pom, insert through hole in corwn and sew centre seam.

Haven't tried making this hat yet - let me know how it turns out.

Posted by Nicky Fijalkowska at 10:49 No comments: 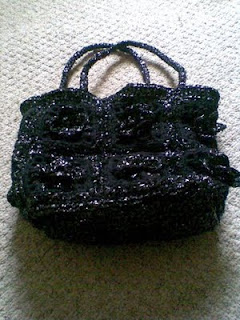 ased with the way this turned out and have been getting lots of lovely comments from admirers. Video tape crochets up a little like raffia. Only it looks really gothic and sinister.

The inside lining of the bag is made out of an old shirt and I've managed to position the shirt's old zip-up pocket to make a little change pocket inside the bag. I'm feeling rather smug about this.
Posted by Nicky Fijalkowska at 04:34 4 comments: 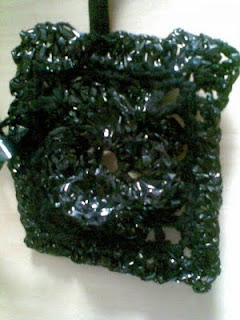 The pattern is based on a bag from the rather disappointing book Crochet Bags! by Candi Jensen. I dislike the over-enthusiastic exclamation mark used in the book title. Is it supposed to suggest an element of surprise? You've found a book called Crochet Bags and -- golly -- you'll never guess what's inside -- patterns for crochet bags. Or is it, as I prefer to think, Candi Jensen barking out an order? Crochet Bags! Yes, Ms Jensen. Right away, Ms Jensen.

In the book, this bag looks grimly hippy-ish, crocheted in rather horrible brown, pink and white cotton yarn.

The video tape crochet looks surprisingly sophisticated. In the dim light of my basement, rather like jet beading. This probably doesn't come across on the photo -- that's the joy of taking pictures of an item made out of two kinds of black. I need to make 12 of these squares and then decide on what to do for the handle.

Posted by Nicky Fijalkowska at 02:30 No comments: