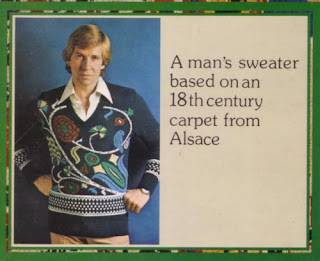 I like the way that this photo from The Art of Knitting (Eve Harlow, 1977) comes with its own caption: "A man's sweater based on an 18th century carpet from Alsace". I also like the way that the man's face makes it very clear that he wishes that the jumper was based on something else entirely. Like, say, something plain and blue.

Oddly enough, I remember a similarly patterned carpet gracing the floor of the Odeon cinema during my teenage years (I didn't grow up in 18th century Alsace: this was Surrey, in the 1980s).
Posted by Nicky Fijalkowska at 02:45 1 comment:

Really enjoying cross stitch as an alternative to knitting at the moment - stops me developing RSI and it's quick and entertaining. Here's a Sex Pistols Pretty Vacant cross stitch sampler in candy pink shades. Visit my Etsy shop for more cross stitch - also taking custom orders.
Posted by Nicky Fijalkowska at 02:41 No comments: 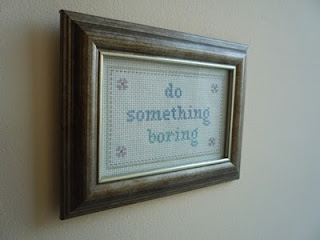 Do Something Boring - one of Brian Eno's Oblique Strategies rendered in cross stitch. Not just for Eno acolytes: the perfect soothing Victorian-style accessory for any post-modern corner of the home.

For best results, listen to Music For Airports and have a nice, weak cup of tea while staring out of the window in a meaningful way. I won't tell anyone that you're just thinking about what you're going to have for supper.

Available in my Etsy shop.
Posted by Nicky Fijalkowska at 03:04 No comments:

Please Don't Do Coke in the Bathroom 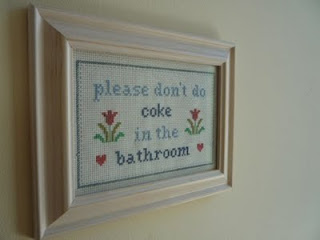 Here's my mock-Victorian Please don't do coke in the bathroom cross stitch sampler, worked in faded blues and reds on a crisp white background.

Just the job if you have a problem with Victorian gentlemen abusing your facilities. Available now in my Etsy shop as a special custom order.
Posted by Nicky Fijalkowska at 05:14 2 comments: 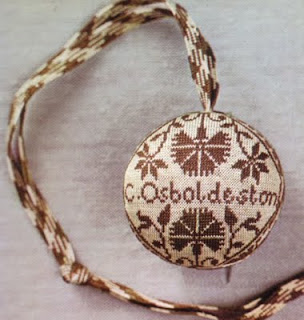 From Eve Harlow's book The Art of Knitting - a knitted pin cushion from the 18th century. This one was knitted on fine steel needles, using silk thread. The braid was probably hand-woven on a loom.

Harlow says that in 18th century England, knitting was a very fashionable past-time, with knitters competing with each other to create ever more elaborate designs, using finer and finer yarn. Despite the elaborate designs, there was a real elegance and constraint to 18th century hand knitting. As the 19th century dawned, however, elegance and constraint flew out of the window and florid colours became all the rage - probably a precursor to the colourful acrylic days of the 1970s...

A knitted pin cushion could be a good starter project for someone taking the first steps in designing their own patterns - a simple rectangle with initials worked in larger gauge yarn would be in the spirit of the 18th century cushion but without the tiny needles.
Posted by Nicky Fijalkowska at 03:44 No comments: