Way, way back in 2010 I wrote a blog post bemoaning the hexagonal quilt I had started in 2007 and had never finished. This mother was the ultimate unfinished project for me. The knitted albatross around the crafters neck. I thought that had bitten off more than I could chew. 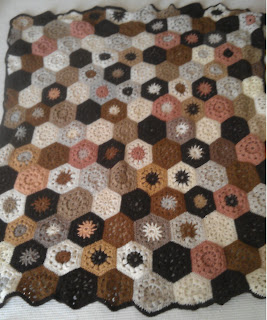 Six months ago, I got this hexagonal monster out of my wardrobe, where it had been lurking, and pulled it, kicking and screaming out into the sunlight. It lay on my bedroom floor, taunting me everytime I looked in its direction. Day by day I forced myself to sew a little seam here, crochet a half-hexagon there.

A week ago, I realised that I was in the home straight and decided to finish this crocheted millstone for once and for all, before the Blue Moon on August 31st. I liked the idea of tying in this monumental craft effort with an appropriately rare astronomical phenomenon. It would be a Blue Moon before I would ever attempt to make anything as large again.

So, here it is. About half the size I had originally planned for, but it's finished - that's the main thing - and it looks really lovely draped over a chair or a bed. 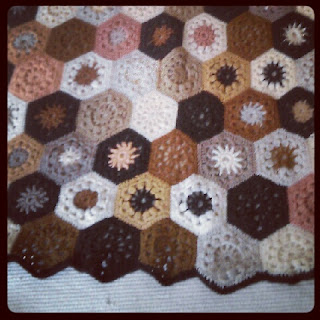 It's very, very satisfying to put away the last oddments of brown yarn, crochet hook and needle and know that my ultimate unfinished project is now done. If you have a similar craft nightmare sitting in your wardrobe, take heart - it can be conquered.
Posted by Nicky Fijalkowska at 02:01 2 comments: 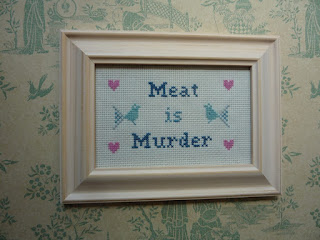 The perfect sampler for the vegetarian, or the Smiths fan in your life (and of course if you know a vegetarian Smiths fan then all your present-buying woes are truly over).

A hand-stitched sampler, plucked fresh from the boughs of my Etsy shop.

More lovely knitted stuff to come in September including some new doll designs which I am rather excited about...

Posted by Nicky Fijalkowska at 01:56 No comments: