Battle of the Cushions 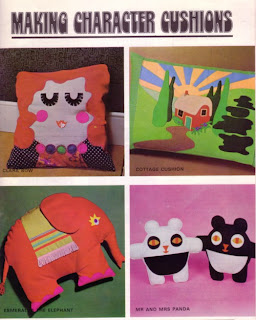 There's a lot to like in this collection of cushions from 1974's Family Circle Yours For The Making magazine. Clara Bow, the multi-coloured patchwork cushion, is a very glamorous way of using up a stash of scraps. That retro 1920s style with a 1970s twist is so evocative of the period and would look fantastic on a boudoir bedroom chair. 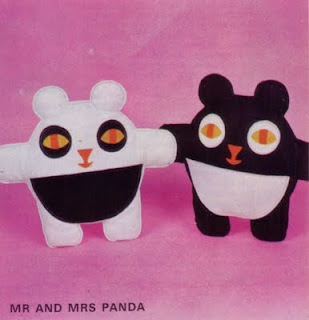 Mr and Mrs Panda, on the other hand, are minimalist amigurumi marvels. They are made out of felt, machine sewn round the edge seams, and eyes and face details are felt scraps stuck on with Copydex.

The Cottage Cushion hasn't aged as well (and is that an oil slick, or a dark spooky fog blighting the scene on the right hand side?). Esmerelda the Elephant is fun, but would look even better in a clashing 1970s floral fabric. For me, Mr and Mrs Panda win the 1974 battle of the cushions. I could make a joke about them knocking the stuffing out of the opposition, but I am feeling restrained and mature this morning, so I won't.
Posted by Nicky Fijalkowska at 03:33 No comments: 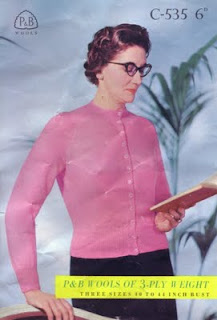 There was a period in late 1950s/ early 1960s Britain when this was as relaxed as things got vis-a-vis spring fashion. Our model has opted for a 3-ply cardigan, stepping down from the more wintery double knitting woollie, but please note that in true Brit fashion, the cardie is still buttoned all the way up to the neck.

Judging by that palm tree in the background, our model is clearly on an exotic tropical holiday, and may soon undo the top two buttons of her cardigan in order to hit the beach. She is reading a book about the local cuisine and is having to hold onto a chair for added support. Garlic in absolutely everything. Crikey.
Posted by Nicky Fijalkowska at 04:30 No comments: