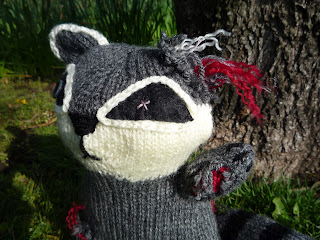 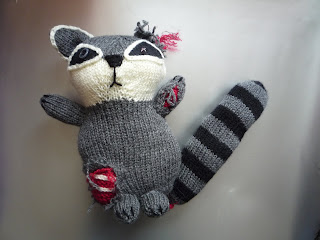 Here he is, my knitted rendition of the One-Eyed Raccoon from the much-anticipated Southern Gothic graphic novel Bayou Arcana. Ol' One-Eye is going to be at the Bristol Comic Expo May 12th - 13th if you fancy meeting him in the the knitted flesh along with Bayou Arcana's creator Jimmy Pearson. 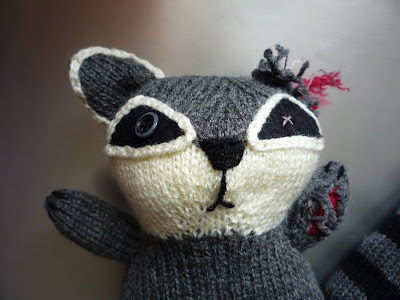 I based One-Eyed Raccoon on Sara Dunkerton's original concept drawings from Bayou Arcana and started off by knitting him as she had drawn him: a scrawny, half-dead fella. What looked great on the page just didn't work out in knitting. Cue much unravelling of yarn and a bit of a think. 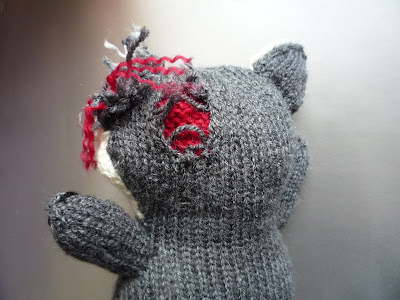 In the graphic novel, One-Eye is a dead raccoon whose body is possessed by a malevolent demon who is taking his final breaths and needs to find a new home for his evil spirit. So, I decided to knit him as a cuddly plush toy who had the misfortune to have the same experience, keeping Sara's original touches of the missing ear, wounds, and tail hanging off by a bone. 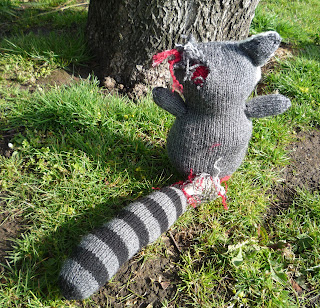 I worked out a method of unravelling the knitting to make gaping wounds without the whole raccoon falling to pieces, and here is the end result.

I do often feel sorry for fictional bad guys. I sit there watching Die Hard, thinking "Poor Hans Gruber, he must have had an awful childhood". I felt the same for this poor raccoon who had his corpse reanimated for such evil purposes: he didn't choose this to happen, it wasn't his fault. I think this comes across in my knitted version. One-Eyed Raccoon: evil through and through and stuffed full of bad intentions but you can still see the fluffy creature he was before the bad times began.
Posted by Nicky Fijalkowska at 03:29