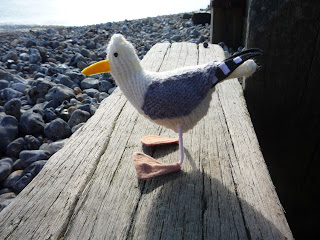 My lovely local yarn shop, The Wool Bar, have asked me to knit them a life-sized Herring Gull. The street that they are on, Warwick Street, in Worthing, has a particularly large and determined gang of gulls who make rich pickings from Warwick Street's many cafes.

I'm a bit concerned that the life-sized knitted version will attract a bit too much attention from the feathered gull mafia outside, but we shall have to wait and see. 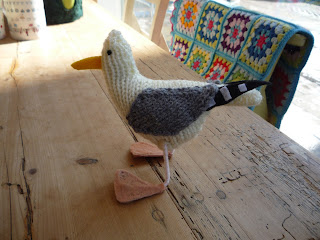 This little fellow isn't life-sized. He's a small prototype gull who I am going to scale up to large scale over the next few weeks. He's a lot cuter than the Warwick Street gulls but hopefully when he's bigger, he'll look a bit meaner. I'd particularly like to capture that look in their eye just before they steal your chips. 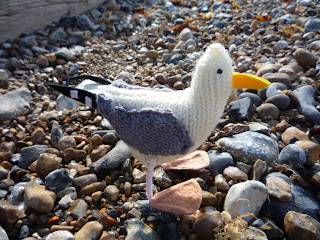 If you'd like to see little gull, he's currently residing with Caroline at The Wool Bar. I hope to get him, and his larger model, made up into knitting patterns soon.
Posted by Nicky Fijalkowska at 03:02