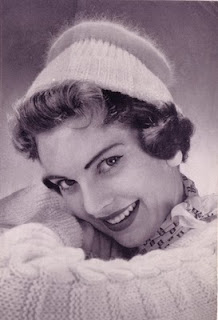 Ah, the innocent days of the early 1950s, when you could use the phrase Mushroom Magic without hearing hippy sniggering from the back of the class.

This perky little hat is knitted from dk yarn with an angora crown. What better way to keep off the chill on a spring morning?

To make a magical mushroom hat, you will need half an ounce of angora wool, 2 oz double knitting yarn, two no 9 and no 11 needles. 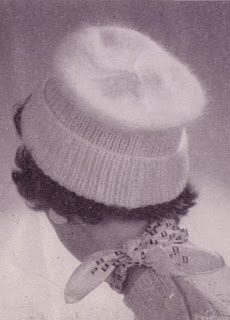 Change to no 11 needles and using angora for remainder of hat proceed as follows:

Continue dec in this manner on next and every alt row until 21 sts remain.

Thread yarn through remaining sts and fasten off securely.

To make up, use a back stitch to join seam, taking care to reverse seam for turn-back.
Posted by Nicky Fijalkowska at 01:28