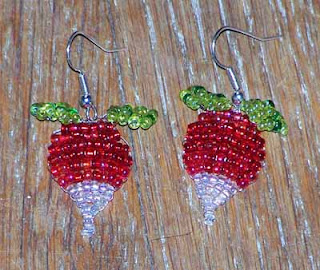 I was watching the Harry Potter and the Half-blood Prince dvd extras over the weekend, and got rather excited about the jewellery that Evanna Lynch had hand-made for her character Luna Lovegood: a beautiful bracelet and a pair of beaded radish earrings.

Luna wears the bracelet to Slughorn's party in the Half-blood Prince - it's a large metal spiral bracelet with a pretty beaded hare patronus bounding along inside the spiral. One of those blink-and-you'll-miss it details - it's only briefly shown on the dvd extras as well.

The radish earrings are from the Order of the Phoenix; apparently the costume designer had made a pair, but Evanna's were even better, so they ended up using those instead. I found a pattern for very similar earrings at www.the-leaky-cauldron.org if you fancy making a pair. You'll need seed beads, wire, and the bravery to wear them in public.
Posted by Nicky Fijalkowska at 02:59