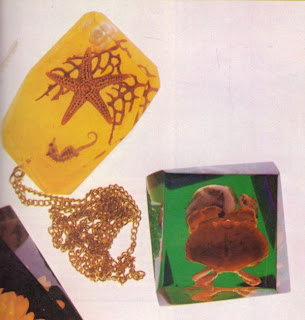 Every now and then a fad or a fashion takes over the world of craft. For a while, you can't move without finding people making, say, knitted cupcakes, or busily knotting macrame owls. And then suddenly everyone stops, sits back, and says, "Why am I doing this?" They move onto the next big thing. Scrapbooking, maybe. Or making pictures out of nails and string.

One such fad I remember from my murky past is the 1970s love of embedding unlikely objects in plastic. You mixed up polyester resin with hardener, poured a little into a mould, then added your objects - coins, flowers, keys - and the topped the whole things off with more plastic resin. After an agonising overnight wait for the plastic to set, you were left with the petrochemical age's equivalent of a fly caught in amber, as shown in the above examples from Ideas For Unusual Handicrafts by Susan Simmons.

There wasn't a great deal that could be done with the final result. A paperweight or ornament was a good bet, and Ideas For Unusual Handicrafts suggests making fingerplates for doors - which is more than you can do with a knitted cupcake.

The diagram below from Ideas For Unusual Handicrafts shows:

a: How to embed a dead grasshopper in different coloured gradients of resin to create a subtle fading effect within the mould

b: Why no-one was particularly pleased with their Christmas present from Susan Simmons that year. 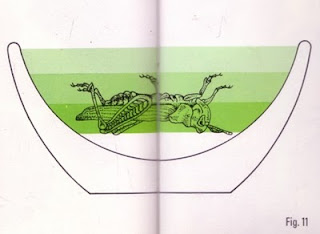 Posted by Nicky Fijalkowska at 05:27