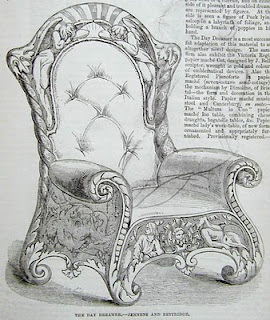 These days, papier mache is associated mostly with small objects: boxes, plates, ornaments. The Victorians used papier mache on a much grander scale, with ornate papier mache furniture being very popular, especially after the display of this spectacular Daydreamer chair at the Great Exhibition of 1851.

"This chair was made from papier mache... and inlaid with mother-of-pearl in the forms of snowdrops, poppies and angels, and covered with buttoned upholstery. It was decorated with "two winged thoughts": one "troubled", in the form of bat-like wings, and one "joyous", illustrated by a crown of roses, both divided by a symbol of hope, the rising sun". (Introduction to Victorian Style, David Crowley, Eagle, 1998)

As anyone who has ever spent hours tearing up little bits of paper and glueing them round a balloon would testify, papier mache is a time-consuming craft. Imagine the number of labour hours that would have gone into making a chair like this. A Victorian papier mache chair would have been constructed from over 100 layers of paper, all applied by hand: testimony to the almost limitless supply of cheap labour that could be tapped into in this era.
Posted by Nicky Fijalkowska at 04:10