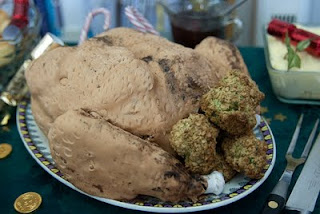 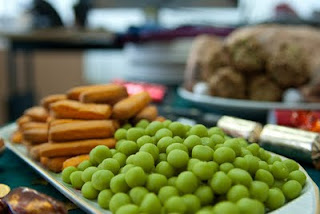 I don't eat turkey, but I do love cake, so this fantastic turkey cake and all the trimmings would probably be my perfect Christmas dinner. It was created by my talented friend Flo in Coventry and her equally talented workmates, as a leaving dinner for her boss.

I'll let Flo explain: "Boss was a real Blumenthal fan so we thought it would be funny to do him a Christmas dinner entirely from cake. It was made all the better by him complaining, five minutes before we unveiled this undertaking, that he was really sad he was missing our Christmas meal and also the one at his new workplace...


Basically, madeira cake was cooked in a big mixing bowl and cut to shape (reckon a heart-shaped pan might have done this, but the dome effect was good.) I bought two round chocolate sponge cakes and cut them into leg shapes then pinned the lot together with bamboo skewers.

Fortuitously, I had found turkey-coloured icing, sold as Teddy Bear brown, so that sorted that. Then I dimpled it all with the end of a spoon, and tried to add some details with black colouring which wasn't too successful.

Someone else made stuffing balls out of flapjack mix, lovingly dyeing some oats green to look like sage. 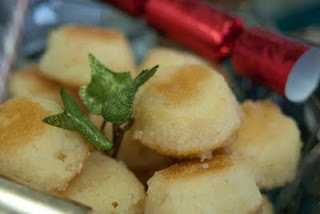 Someone else made fairy cakes and covered them in sugar syrup for roasties, another made shortbread, shaped and dyed orange for carrots, another rolled green marzipan peas, and another made a sponge cake and covered it with buttercream to make mash. Then all we needed was chocolate sauce gravy and bingo! 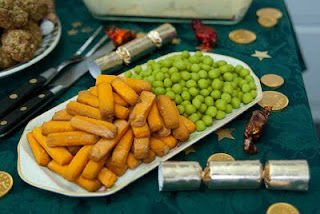 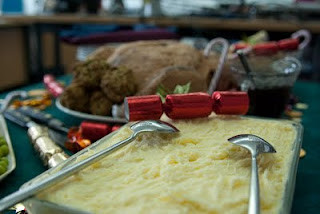 It was brilliant when he walked in coz we had carols playing and lights and tinsel and he really thought we'd cooked him a roast dinner - so his jaw dropped when he realised what it really was. 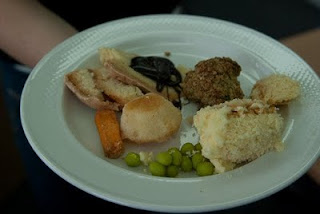 Problem was, we served it up as a plate of roast dinner which we all ate but it was ALL CAKE so we felt quite ill... didn't have thirds..."

Posted by Nicky Fijalkowska at 03:05